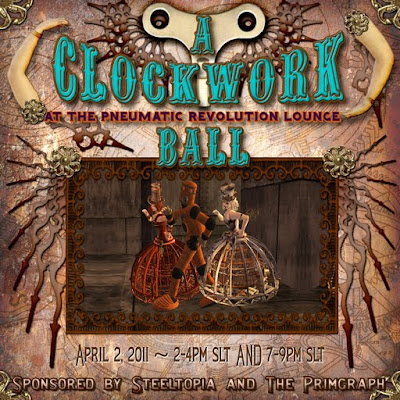 The new issue of The Primgraph (due out in early April) is all about Automata!

And to celebrate this, The Primgraph magazine – in association with the Empire of Steeltopia – will be hosting The Clockwork Ball on Saturday April 2, 2011.

The Balls will be held in The Pneumatic Revolution Lounge in Steeltopia.

We are living in a time that will perhaps come to be known as the golden age of the automaton. His Imperial Highness Steelcobra Calamari has decreed that the State of Steeltopia will celebrate the creations of our time at a fine ball, at which it shall be proved that mechanicals are as graceful as humans upon the dance floor.

Whether you are called clockworks, automatons, robots, war machines, household helpers, factory workers and so on, please join your constructed colleagues for an evening of well-earned merriment.

Prizes will be awarded for the attendees whose appendages and / or apparel most please the eyes of our judges.