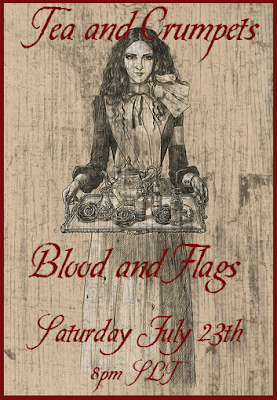 And now a message from Captain Static…

“Love and scandal are the best sweeteners of tea.” ~Henry Fielding, Love in Several Masques

The Scoundrels are hosting a High Tea as only a bunch of drunken pirates can. For those unfamiliar, tea is a habit of those city fancy pants folks which includes sweet cakes and other tasties. We’ve made some fine connections.. er um ..friends across the Steamlands. I thought it time we put their fears concerning us being uncivilized rogues to rest. If they happen to divulge information about the shipments of goods, or where certain stores of valuables are kept while having a relaxing cup, I am all the happier. Now, I like my tea “sweet”… and with a bit of rum. Scandal, love and rum are nothing new to pirates. Neither are weapons. To keep the festivities civil.. we will be hosting ‘capture the flag’ ironclad battles at the event, with proper tea ships no fancy pants could ever think as barbaric. So, scoundrels, dust off your finest. Let’s show the Steamlands the “sweetness” of being a pirate, and rob them blind at a later date. But that’s between us.

Tea and Crumpets – Blood and Flags
Spread the love